In 1939, Omeo was hit by a devastating bushfire.
I recently found a letter written by my father to his future wife, Olive Kracke, who was holidaying in Tasmania, describing the catastrophe:

I suppose you have heard all about the excitement we have had here by now.

I believe all sorts of rumours have been in circulation and you probably felt anxious about your people, but they are all well; your father was scared but he is his old self again.

I suppose I could write for a week of the different fires, but as you know, men have been out for a few weeks to different parts trying to stop them and burning breaks; but last Wednesday was the first really dangerous fire.

After Faithfull’s, it came over heading for Hinnomunjie Station and Charlie Scott’s flats caught, but the fire was stopped at the road there, then it seemed to be coming over the hills right along from this side of Ganci’s house, right out past Lloyd Kelly’s place.

All the men from Omeo were there and also Benambra. However, just before the flames reached the grass, the wind changed to the south and relieved the situation.

Kelly’s got a fright. They thought their house would be burnt.
The grass burnt within about 100 yards on Tom Kelly’s and it jumped right across the hills over Hinnomunjie Station, the station is not burnt though.

I thought it a terrible experience.

Tuesday was cool and the fires seemed to be safe but Wednesday the wind came from the north and they all began again.

At about 4:30 that afternoon there must have been a dust storm high up, because from daylight it changed to darkness and it seemed as though the fires were getting nearer.

Men went to a big fire at the Swamp and also to Cobungra.

The Cobungra fire must have been awful from the tales told.
Cliff Bant and Vic H ..(?) were there. They spent the night in the river.

Fires came from all sides, with the main fire with a howling gale heading straight for Omeo, but there was no way of warning the town.
Everything’s so burnt out there including the Station.

Well, that fire came straight over Dry Gully and over the top of Mesley.

I had just gone to Round Hill with some chaps and had just reached it when we noticed a blaze which happened to be the Cemetery.

Immediately on reaching the top of Mesley with such a gale, it jumped to there and burnt up to the hospital and on.
It also broke out opposite Les Du Ve’s house just across the road and flew up the hill.

We came back to the Cemetery but it was burning right round the town except the Hilltop corner by then, and no-one knew where to turn.

It was terrible, with such a wind a spark set it going in a moment.

From the top of Mesley, it flew to the pine plantation and then to the blacksmith shop and of course that part of the town was an inferno immediately.

The firemen did a marvellous job in stopping it at Sandy’s Store by pouring water on Slater’s shop.
All that portion as far as Sandy’s and the Age are burnt.

McCoy’s and Haylock’s houses were saved, and the houses down near the swimming pool, …. (?) escaped too, the sparks evidently passing over them.

A shed in the school ground behind the National Bank was burnt and the grass in that hollow.

Lots of people did good work in putting out sparks and bark along the main street behind Bradley’s garage on the higher portion, in fact all over the town.

All of the women and children were rushed to the Hilltop Hotel which was the only safe place.
I believe sparks were extinguished round the Park too which saved the higher portion of the town.

I believe everything is burnt from St Bernard to Omeo. There is a tremendous loss of stock.

If I knew all the names, I could tell you lots of hair-raising experiences and of losses.
…(?) Perry lost everything and escaped only by driving the car in the water race and staying there all night.

Fears have been held for lots of chaps but all are alive except a chap named Richards from Cobungra.
He tried to save his family(…?) and rode back into an inferno.
He was buried today.
His wife had a child about three weeks ago.

By the way, a child was born to a Mrs McNamara during the fire, while at the Hilltop Hotel and both are well, I’m told.

It was a terrifying night and everyone is feeling it but there is no danger now, as there is nothing left to burn.

Fifty or so men from Bairnsdale arrived early next morning and have been out fighting the Swamp fire since, and a big bus load from Maffra-Sale arrived yesterday but all have returned.

The Memorial Hall is being used as a centre for food and the Church of England Hall as a hospital; all the patients were saved and taken to the Hilltop.

No-one closed an eye all that night and everyone looked a wreck next day. 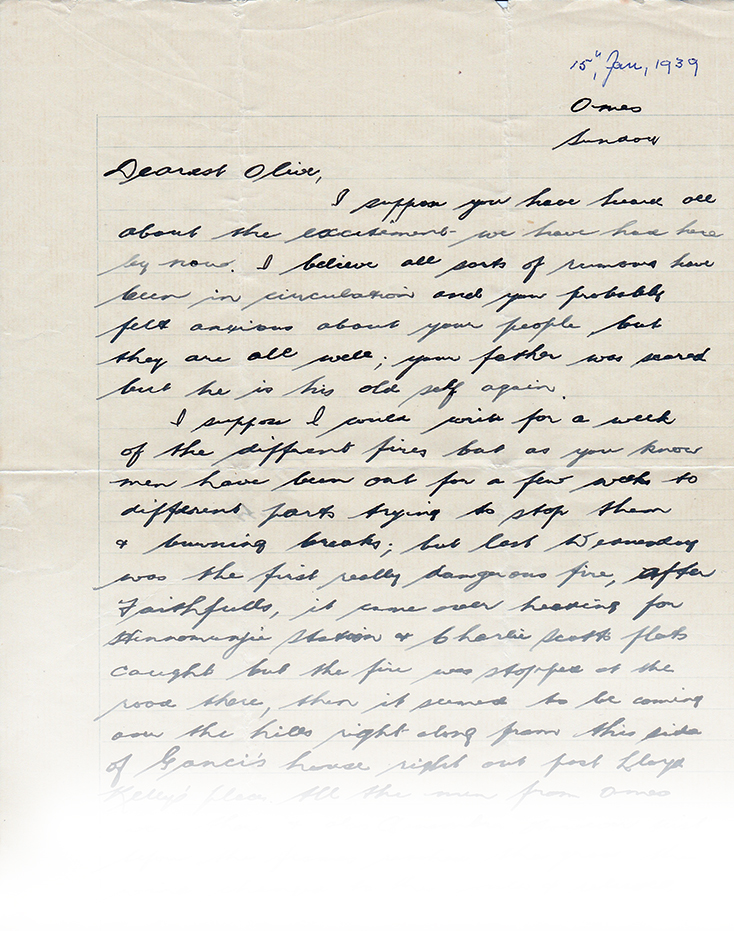 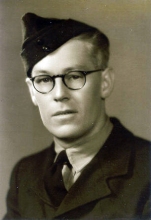 Harold Bolitho was a Commercial Bank of Australia teller, aged twenty-nine at the time of writing the above letter.

He and Olive Kracke were married in March, 1940.

During WW2, he served in RAAF No 4 Wireless Unit, Central Bureau.
Central Bureau was under the direct command of General Douglas MacArthur, and was set up to detect, record, and translate all messages transmitted by Japanese forces in the Pacific.
It was headquartered in Brisbane, but its Wireless Units worked in the field, moving forward with MacArthur, constantly intercepting and deciphering enemy messages.

RAAF No 4 Wireless Unit was formed as a highly mobile unit, and served at Hollandia, Morotai, Labuan Island, and at Luzon, Philippines.

As the war progressed, the units became so efficient in their work that they were monitoring all enemy radio traffic, and in fact frequently knew the Japanese intentions before the messages reached their intended destination.
The U.S. High Command highly praised the Wireless Units of Central Bureau, stating that their work effectively shortened the War in the Pacific by at least two years.

At the end of the war, Central Bureau was dismantled. All personnel signed a lifetime secrecy order to not speak of their wartime activities.
No promotions applied. No evidence of their Central Bureau service was recorded, including overseas service. No medals were struck.
Central Bureau personnel worked diligently and efficiently when called upon, and when the job was done, quietly went home.

It was only in the 1990’s that the Australian Government allowed the release of details of Central Bureau and its activities. 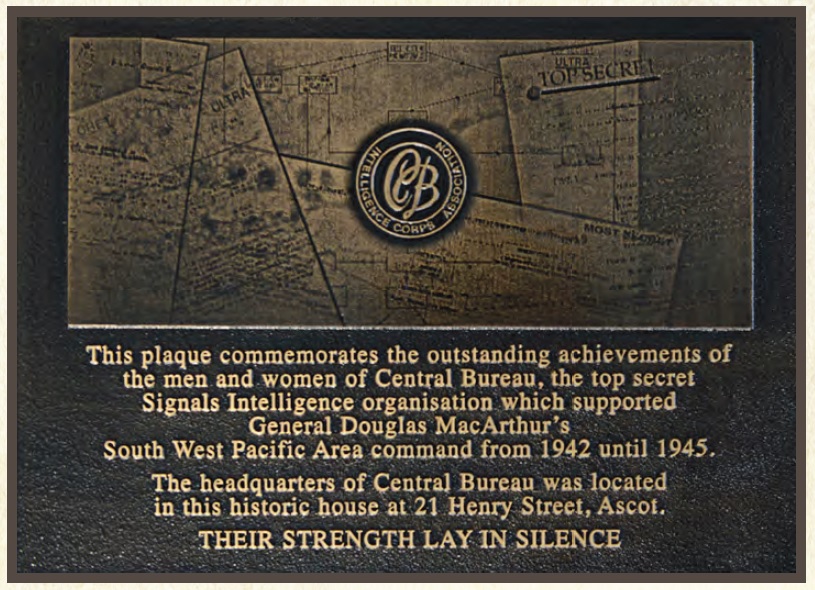 Harold and family left Omeo in 1956, moving to Bruthen, and then to Bairnsdale in 1960.